When you are choosing the best Shopping Cart Software for your company, our recommendation would be to look for a platform that is comprehensive, yet convenient to use. For this purpose, we shall take two major players among such platforms to the standoff: Shopify vs Magento.

The most crucial thing you have to keep in mind while picking the E-Commerce platform is what features the one can offer for you and your business.

Shopify vs Magento: which one is more useful?

After we have analyzed both of them, it would appear that Magento has a significantly larger number of components than Shopify. Shopify and Magento both offer a numerous number of things you can add in your store.

Note, that with Magento you are ought to be cautious when listing vast quantities of items. You have to keep an eye on the ability of it to endure such quantities.

That is the reason why you need a proper understanding and some knowing about how to organize your store properly.

With Shopify, it is way easier. As Shopify deals in the way that such issues were completely overseen and facilitated.

The look. Magento offers a substantially bigger list of free and paid themes and formats. 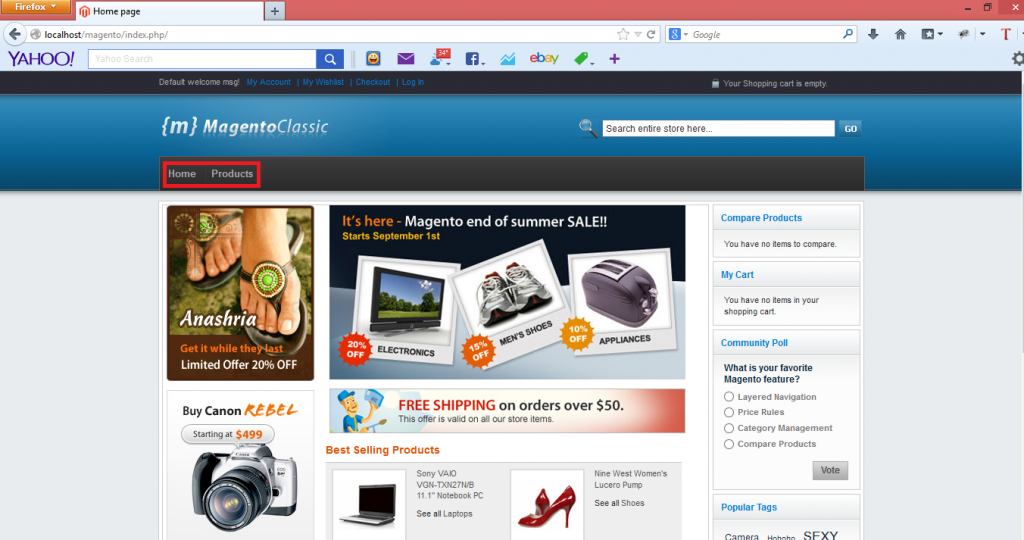 Magento’s paid themes seem to be more attractive as their price starts from $1, while themes from Shopify – start at $80. In the meantime, themes offered by Shopify appear to be more convenient in use and are represented in bigger quantities. Nevertheless, both platforms have mobile-friendly and responsive themes so you don’t have to worry about the user experience of your mobile users.

Applications and Add-ons. Magento beats Shopify in regards to the number of applications. By June 2016 Magento Extension Marketplace has more than 9486 applications and the Shopify App Store has just 539. This is probably the result of the open-source policy of Magento in combination with a developer-friendly environment. Hence it encourages developers to create more tools and apps for the platform.

Both platforms possess a genuinely simple UI and dashboard. But, as it appears to be Shopify is one step ahead thanks to its convenient design. Cost of the platforms

And now it is time for the best part: let’s talk about the price tag.

Shopify offers 4 different plans depending on the features you need:

Additionally, Shopify Plus is offered for Enterprise-level clients. All plans come with the unlimited number of products, file storage, free hosting, domain name and SSL certificate.

Magento Community Edition is free but you will need to pay for your own hosting and the pricing might vary between $5-$100/month depending on what you need. Magento Enterprise Edition cost $22,000 a year and also you will probably need developer support each month. You can find a good Magento developer for about $15/hour.

Shopify does not charge you any fees for bandwidth. For Magento, this will depend on your hosting provider.

If you use Shopify’s payment gateway, they won’t charge you any transactional fees.

If you decide to use another gateway or method, they will charge you as follows:

The credit card rates that you will be charged are:

So, in the end of the day, in our Shopify vs Magento stand-off, Shopify appears to be easier to set-up and maintain. It spares your time allows you not bother with hosting. They also provide you with an amazing support.

At the same time, it is a closed platform, so you won’t have that customization freedom as with Magento. Also, there aren’t that many apps on their App Store.

Magento, on the other hand, is an open source platform, thus it is more adaptable. You fully control your store. But it comes at the price. You’ll have to invest way more effort to make up a decent website. Although, there are more apps and tools in their market for you to use. And the worst thing about the Community version is that you don’t get any support from Magento itself.

To conclude. It is all up to you to decide which way to go: customization possibilities of Magento or convenience of Shopify. Just remember about the flip side of the coin.

It all comes down to the fact that different scales of business require respective ecommerce platforms. Beginners, usually, cannot afford expensive solutions and go for cheaper option. But then, the business proves to be successful, stress-load increases due to numerous customer base and initial solution can start lacking in functionality. The best way to solve this problem is platform migration.

According to experience of some established ecommerce founders, that process can greatly help a business in the time of need.

And that’s right what we’re trying to point out in our articles! There is no need to bind yourself to one platform for infinity.
We’ve even written a whole article for that! Thanks for sharing our position, Petro =)

[…] course. While Magento Community Edition – maybe not. Why? We have covered this in our article Magento vs Shopify. And we are just starting to expand the series of these articles further on, so watch for the […]